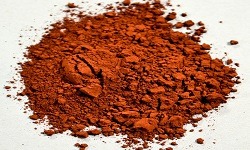 Iron(III) oxide or ferric oxide is an inorganic compound with the formula Fe2O3. It, along with iron(II) oxide (FeO) and iron(II, III) oxide (Fe3O4), is one of the three main oxides of iron. FeO is rare while Fe3O4 occurs naturally as the mineral magnetite. Fe2O3 is also known as the mineral hematite, which is the main source of iron for the steel industry. It is ferromagnetic, dark red to red-brown, and readily attacked by acids. Iron(III) oxide is also often known as rust, which is acidic in nature.

Iron(III) oxide is a product of the oxidation of iron. It can be prepared in the laboratory by electrolyzing a solution of sodium bicarbonate, an inert electrolyte, with an iron anode: 4Fe + 3O2 + 2H2O → 4Fe(O)OH. The hydrated iron(III) oxide formed (Fe(O)OH) is dehydrated around 200 °C to yield iron(III) oxide: 2FeO(OH) → Fe2O3 + H2O

It is widely used as the raw material for steel and iron industries for the production of iron, steel, and many alloys.

Iron(III) oxide is also used as a pigment under names various names e.g. Pigment Brown 6 and Pigment Brown 7. Some of the pigments are approved by the US Food and Drug Administration (FDA) for use in cosmetics. Iron oxides are also used as pigments in dental composites alongside titanium oxides.

The very fine powder of ferric oxide, known as “jeweler's rouge”, “red rouge”, or “rouge”, is used as the final polish on metallic jewelry and lenses, and historically in cosmetics. It is used in optics fabrication and by jewelers for the superior finish it can produce. When rouge is used to polish gold, it slightly stains the gold, which contributes to the appearance of the finished piece. Rouge is sold as a powder, paste, laced on polishing cloths, or solid bar (with a wax or grease binder).