There are three types of methods by which sodium benzoate can be prepared:
1. Naphthalene and Vanadium pentoxide is oxidised to give phthalic anhydride, which in turn is decarboxylated to produce benzoic acid.
2. Toluene and nitric acid react to form benzoic acid.
3. Benzotrichloride is hydrolysed and then reacted with a mineral acid to give benzoic acid.
Once benzoic acid is obtained from either of the above methods, it is dissolved using a sodium hydroxide solution.

Sodium benzoate is a preservative. As a food additive, sodium benzoate has the E number E211. It is bacteriostatic and fungistatic under acidic conditions. It is most widely used in acidic foods such as salad dressings (vinegar), carbonated drinks (carbonic acid), jams and fruit juices (citric acid), pickles (vinegar), and condiments. Concentration as a preservative is limited by the FDA in the U.S. to 0.1% by weight. Sodium benzoate is also allowed as an animal food additive at up to 0.1%, according to AFCO's official publication.

Sodium benzoate is used as a treatment for urea cycle disorders. Recent research shows that sodium benzoate may be beneficial as an add-on therapy (1 gram/day) in schizophrenia. Total Positive and Negative Syndrome Scale scores dropped by 21% compared to the placebo.

Sodium benzoate is used as a preservative in medicines and cosmetics. 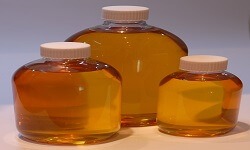